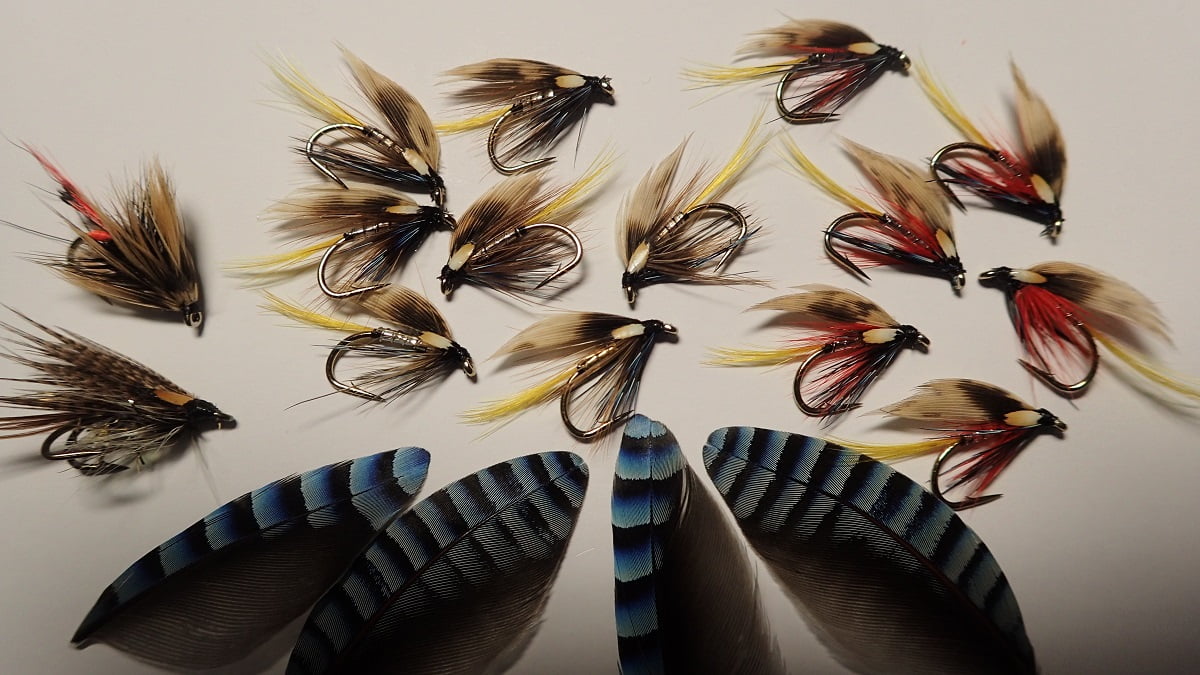 In the third part of a series by angling writer George Barron, the author takes a look at the flies and methods required to catch wild trout from Welsh lakes.

I’ll stick my head on the block here and say – “ small wild brown trout on Welsh mountain waters are likely the easiest fish to catch “ – that being the case, they become an ideal target to introduce yourself, novice anglers or younger members of the family into fly fishing.  I would add though, that catching their big brothers and sisters can prove a slightly harder challenge.

Wild brown trout on mountain or wilderness lakes have predominately a very catholic attitude to food.  If it looks lifelike and they can grab hold of it, they likely will. I have caught them with frogs, mice, shrews, leeches, feathers, sticklebacks and small perch and trout in their stomachs.

Most of these “ food “ items would be very hard for the fly fishing angler to imitate and in reality, they would not be nearly as successful as conventional and traditional wet or dry fly approach.

What that last paragraph was intended to clarify was that at certain times of the season ( usually through March, April and May ) there is often very little fly-life available in or on the water to seriously sustain the fish.

Once the weather and the waters begin to warm up this scenario takes a turn for the better, particularly once the Coch-y-Bonddu beetle, Cow Dungs and the Heather Fly (Bibio) begin to hatch on the surrounding moorland and are blown onto the water.  As the season progresses, craneflies (daddies) and sedges also add to the trouts potential larder.

Now that we’ve roughly establish the chain of food that is and isn’t available, and when, I believe that will help to clarify how the visiting angler should prepare for a day fly fishing for wild brown trout on the majority of Welsh upland waters.

Likely the most important factors dictating early season fishing will be the prevailing weather and I’ve always believed the size and depth of water.  Albeit, I have fished very successfully ‘ once ‘ in a snowstorm at 1200 feet above sea level, I wouldn’t particularly recommend it.  Its my experience that trout in deeper lakes are inclined to hold longer at depth until the shallower water warms up, whereas, trout in shallower waters become more active feeders earlier.

Choice of early season wet flies can be a lot more liberal than those required later in the year when it will be more relevant to “ match the hatch “  Lures and flashier flies, intermixed with a couple of basic traditional wet flies will be all that is needed.  I suggest flies size 12 or even 14’s in all cases.

Wet flies such as – Kate McLaren, Black Pennell, Watson’s Fancy, Bibio, Black & Silver dabblers and something Claret will always trigger a response.  Old anglers on the Elan Valley and Cambrian waters always recommended a ‘ flashy ‘ wet fly on the cast – Silver Invicta, Butcher variants and Dunkeld to name a few.  I personally wouldn’t fish without a Pretender on the cast, as I believe a fly containing a mix of black, red and silver to be a must early season.

Its highly unlikely there will be much surface activity from the trout until the first small buzzers or on a few waters, early Olives appear. One method well worth using, particularly where streams and deeper gullies are to be found, is to use a black ‘ leech-like ‘ lure.  This method used on an intermediate or subsurface line can often tempt a better fish.

I always think this is the best time to fish the upland waters.  The weather will have improved and the major terrestrial fly and beetle hatches, so important to the wild trout’s food larder will be kicking in. A few healthy weeks feeding often sees them looking like little fat pigs.

Overcast, balmy days are always welcomed by the angler, but bright sun and wind are far more important to the trout.  Coch-y-Bonddu beetles and Heather Flies (Bibios) require sunlight to hatch, and the trout are delighted when the wind blows, strong as you like, to blow these insects onto the water.   Imitative dry flies will work fine on the edge of a ripple or in the in the margins, but wet flies will be far more effective the stronger the wind blows in all areas of the lake.

Once again, traditional and conventional wet or dry flies to match the hatch will be all that the angler requires. So Coch-y-Bonddu, Bibio and variants both wet and dry, Cow Dungs patterns I always seem to do best wth the wet fly, Mallard and Claret and Olive patterns, I’d still use a Kate McLaren and a small Silver Invicta to make up a cast of three with possibly a Cochen Las on the point.  If rising trout are ignoring your offerings, scale the fly size down to 14s and fish them slower – that usually gets a response.  I’d would even advocate small Hare’s ear nymphs, Hutch’s Pennell and small emerger patterns as another alternative.

I love this time of year fishing on the hills, because everything seems at peace and in harmony with the world, even anglers.  The trout have fed well throughout the summer months on a productive bounty of food and are are hitting prime condition, cruising and topping up on whatever insects hatch or drop on the water. The better fish have likely seen a fair amount of anglers flies pulled across their noses and have become wary of anything that has a hint of ‘ artificial ‘

Most of the flies that worked during the summer months will still catch fish. Daddies are a decent mouthful of protein for them this time of year, plus many sedges of the larger species seem to hatch during August and September.

Its not always possible to handpick the days you can fish, often its simply a case of making the best of whatever fate throws at you. Quietly walking a shoreline, continually on the move is likely the best approach irrespective of the weather, but should the wind decide to ship in from the west with a vengeance, even with accompanying rain, I’d suggest that would be the day to be up on the high waters at this time of year. Wild and windy weather on the Welsh moorland waters is going to give the angler his best chance of bending into a few really decent trout.

During the last two seasons there was some very inconsistent weather patterns that affected both fly hatches and obviously trout feeding patterns, but at the tailed of each of those seasons some superb wild brownies provided some exceptional sport.

As an aside – floating and intermediate lines will be all that’s required, and in reality I guess and dozen or so wet fly patterns will suffice, plus a few dries.

Travel light and keep moving would be my best advice.  I do it with a bottle of water and a couple of bars of fruit and nut and an apple.  Phone signal can be a bit hit and miss, so let someone know your plans and time you intend to be ‘ lost ‘ enjoying yourself on the hills.

Want to read more? Part 1 of this series can be found here. Part 2 can be read here.

For further reading on flies for wild lake trout “At The End Of The Line “ and  “A Fine Line“ , are both excellent angling books by George Barron, who has fished wild trout waters for over forty years.

Available from George at: george_barron@btinternet.com