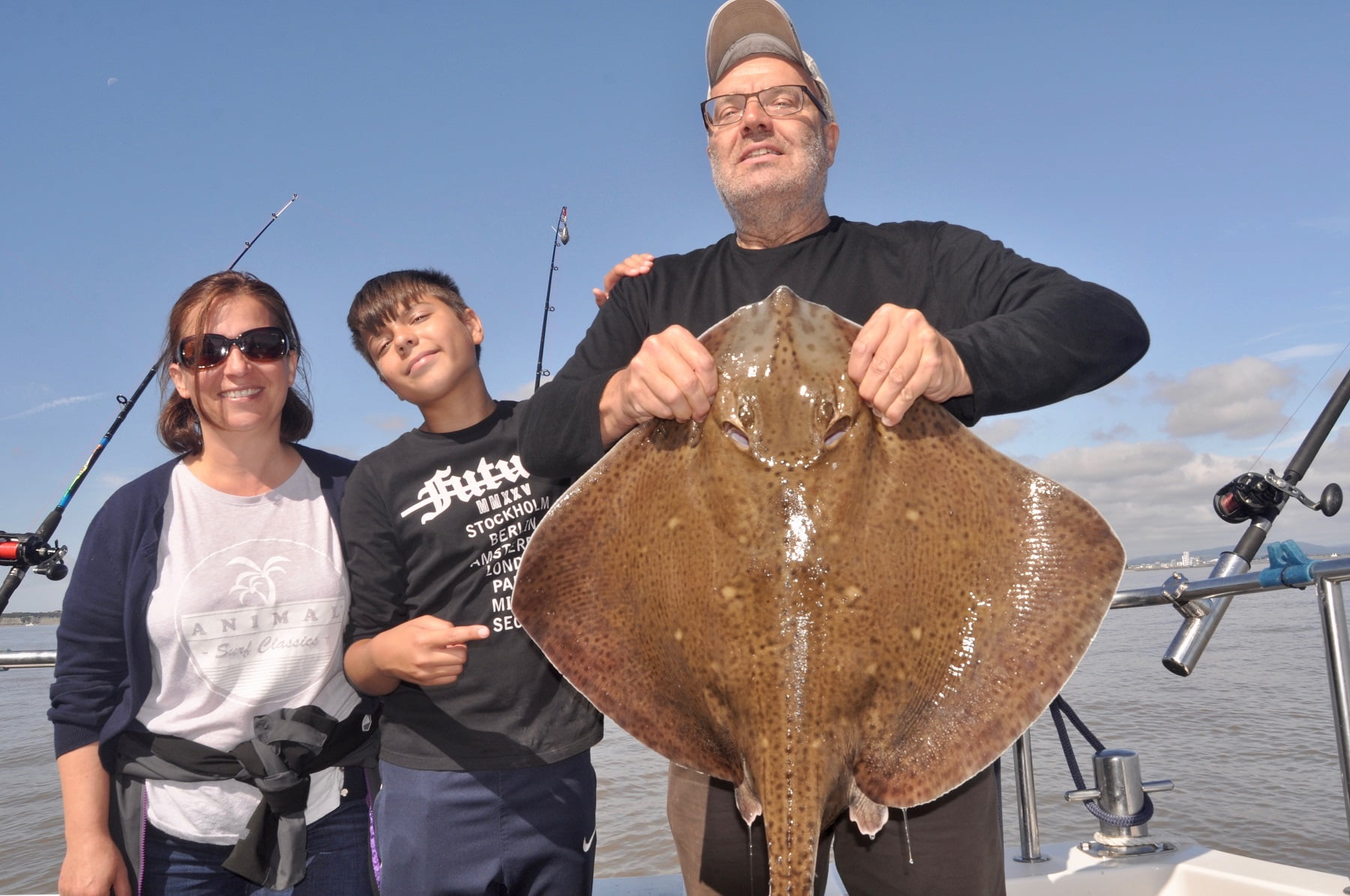 Haydn Ross is the proud owner/skipper of ‘Tusker 2’ an immaculate, fast and extremely spacious Evolution 38 charter boat he moors on the River Ely adjacent to Penarth Marina, at Cardiff Bay Marina.

Haydn has boat fished in the Bristol Chanel since a very young age and recently he started offering a special deal designed specifically to get youngsters and their parents, fishing. During the school holidays, along with occasional Saturdays throughout the autumn and winter, Haydn offers individual places for just £25 per head.

For this you get four hours fishing with tackle with all bait provided. Other than mackerel trips, surely this is the best value charter fishing anywhere in the country today?

Of course there’s little point in setting off on an affordable, short duration fishing trip if you are not going to actually catch something, and this is where Haydn’s trip are perfect.

The inshore grounds off Cardiff Bay are hugely productive for numerous different species, several of which are regularly caught weighing better than 10lb and include conger eel, blonde, thornback and small-eyed rays, smoothounds, cod, bass and bull huss. Several smaller species can also be caught including plenty of dogfish and while these eager bait takers are often decried by experienced boat anglers they are a more than welcome catch for any child or novice angler, and most days catching one can be pretty much guaranteed.

All of these can be caught within a 15-20 minute run from the Cardiff Bay Barrage lock gates and simply experiencing a trip through this impressive feat of engineering that holds back the vast expanse of water held within the bay, is reason enough for many visitors to book a boat trip!

In August 2019 I joined Haydn on the first of two back to back four hour trips he was running one day. We sailed with a full crew of twelve which included several children and their parents, several of whom were making their second or third trip aboard Tusker 2; what does that tell you? Haydn took us to a patch of mixed ground not far offshore in Sully Bay, where any of the species previously listed could have been encountered. We were anchored within 20-minutes of leaving the barrage with barely a breath of wind and warm sunshine, conditions could not have been better for our trip.

Haydn, and his son/crewman Lennon, were faced with the somewhat daunting task of looking after 12 novice anglers, which I quickly noted they have mastered down to fine art. Twelve rods were already set up, rigged with a simple, efficient and pretty much tangle free running ledger. An equal number of hook lengths pre-baited with squid or mackerel were hanging close by out of harms way, ready to be quickly attached. As a result within minutes of the anchor taking hold each of the crew were eagerly watching the tip of their respective rod for that first nodding indication of a bite. As and when required, Haydn and Lennon regularly changed baits or offered other assistance.

First fish of the day fell to Steve Huddleston, who had travelled down from Brecon to spend the day fishing with his son and grandson. Steve, who generally fly fishes for wild brown trout throughout the Brecon Beacons National Park, boated a rather modest thornback ray, and the smile on the face of the proud grand father could not have been bigger had he caught one much larger.

Moments later Filiz Gwillim from Cardiff, fishing with her husband and son, was proudly displaying the first dogfish in front of my camera. Leighton Hopkins from Marshfield who had brought along his son was next after landing a lively strap conger, and he was quickly followed again by Filiz, who had added a thornback ray to her tally.

Despite the fact we were catching a few fish Haydn was sure we could do better. He started the engine, called for lines in, and took us to another area, where he felt there was a better chance of seeing a few blonde rays. The second mark was located just off Cardiff Bay, just minutes from the barrage, and within no time at all the move was fully justified when Irfan Gwillim, Filiz’s son, hooked into what clearly was a much bigger fish. The young lad certainly had his hands full but with patience, grit, and just a little help from his dad he eventually managed to bring a very decent double figure blonde ray to Haydn’s waiting net. Dogfish, too, were more plentiful at this mark with youngsters Brandon Lee McLaughlin and Max Ball quickly catching their first fish of the session.

The most impressive fish of the trip though was a 14lb starry smoothound that top rod Filiz caught, not long before Haydn once again called for lines in as our trip was at an end. Most if not all of the crew were having such an enjoyable time they wanted to stay out longer, and on the way back in it was heartening to hear several of the family groups already making plans with Haydn and booking a return trip.

Shortly after dropping us off back at Cardiff Marina Haydn welcomed his second crew of the day aboard Tusker 2, and set off on the afternoon trip. Within an hour of him sailing my phone was pinging to announce the arrival of an image from that session, the first of 14 blonde rays the biggest weighing 18lb they caught during that four hour trip. In my book this ranks as seriously good fishing for a full days charter, a trip which undoubtedly will cost you considerably more than £25 per head!