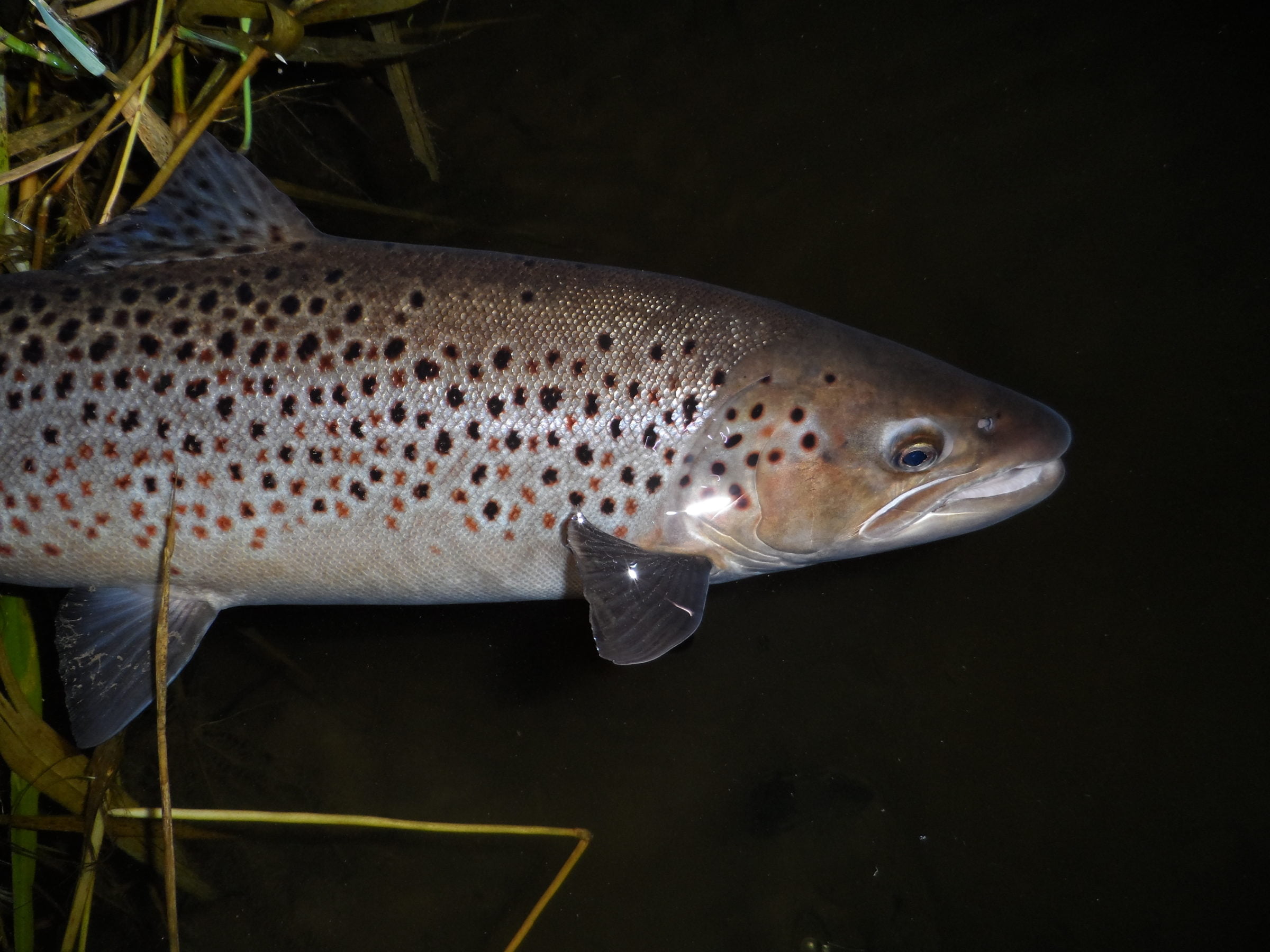 In this article game fishing guide Oliver Burch looks at best practice for salmon and sea trout fishcare and photography.

As in other parts of the UK, anglers in Wales are concerned about reduced runs of salmon and sea trout (sewin). While efforts are being made to understand and address the very complex problems at sea and in rivers affecting migratory fish, as sportsmen and conservationists we should be making every effort to ensure that as many as possible of these wonderful visitors from the tide reach their autumn spawning grounds.

Welsh salmon and sewin are big fish, exciting to catch and beautiful to look at. As with all big fish, they are vulnerable in the final stages of playing, unhooking and release.

Experienced anglers used to former catch and kill regimes are sometimes not very good at this and novices should also keep in mind a few basic rules which can easily be forgotten in the excitement of hooking and landing a specimen – maybe your first salmon.

Hooks: Take what steps you can to avoid hooking your fish deep in the throat rather than the jaws. If you pierce one of the vital blood vessels leading to the gills, the fish is almost certainly dead, whatever action you subsequently take. You must – by law – use de-barbed or barbless hooks for migratory salmon and sea trout in Wales. So obey the NRW hook regulations and, when selecting flies or lures, opt for those with smaller rather than larger hooks. A small hook once embedded in the gristle of a salmon’s jaw gives a surprisingly secure hold.

Playing: Try to bring the fight to a conclusion as quickly as possible. There are the “fiery ones” and the “stately ones,” particularly with salmon which can fight deep and slow. However, the more a powerful fish exhausts itself and the more protracted playing becomes, the more its chances of survival are reduced. The days of fighting a fish until it keels over on its side with exhaustion and floats over to the gaff (now illegal of course) are gone.

Experience in playing fish is a great teacher, but try to keep the fish moving with continued pressure from the rod. Never take a chance when netting a fish, but take the first opportunity. Obviously a companion to do the netting, particularly if you are using a long double handed fly rod, is a great help.

Nets: Have an adequately large landing net either close to hand or on your back and have a suitable landing place in mind before you start fishing. If you are fishing for sewin at night, practice to make sure you can deploy the gye net in darkness. All nets in use today should be knotless to avoid damaging the layer of slime protecting the fish’s skin, but a small mesh is also very useful to avoid splitting fins. On the other hand, beware wading deeply with a fine mesh net which can cause a lot of drag in a powerful current. Once the fish is in the net, do not lift it out onto the bank. Big fish kicking around on gritty beaches or even on grass do themselves no good at all. Leave the fish in the net in shallow water at the margin. Fish so treated will usually lie quietly for a while, respiring and recovering while you undertake the next steps.

Other landing methods: No other instruments than nets are now permitted, but anglers in some pools still like to beach their salmon. This avoids the need to carry a heavy net around, but beaching is not as easy as it sounds and I still have concerns about fish to be released flapping around on the stones. In the days of catch and kill, beaching used to be followed by tailing, pushing the fish further up from the water before knocking it on the head. Tailing, which is holding a salmon by the “wrist” just in front of the caudal fin, certainly does work and is the best and most secure way to hold fish in the water when handling or releasing. However, under no circumstances use the tail to hold a salmon up in the air as the unsupported weight will dislocate the spine. If a salmon is to be lifted for some reason, the belly must be supported as well. In summary, a generous net is the most useful tool for successful catch and release. 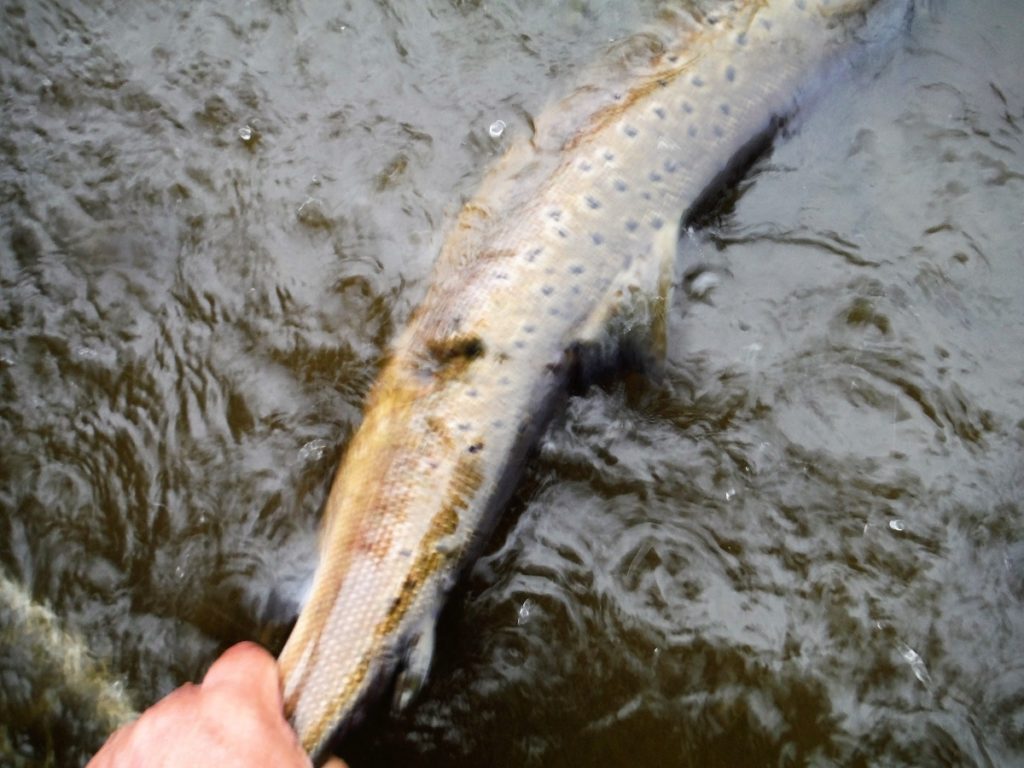 Salmon by the tail

Unhooking: In the case of salmon and large trout I am convinced a fair-sized pair of artery forceps with curved jaws are the most useful tool for the job. Take a firm hold on the hook shank and twist it out – never mind damaging the fly. If you are very unlucky and find the fish hooked deeply or near the vital blood vessels, I would leave the hook in place and cut the nylon as far down as possible. If the fish bleeds from the gills, you have lost it, and with it the contribution it would have made to future generations.

Photography: Again, remember that big fish require more careful handling than small fish. I am certain that more fish are killed today by photography than any other agency. Do not place a live fish on the bank or beach for a photograph and do not keep it gasping in the air. Instead, keep it in the water. The survival of the fish undamaged should be your first consideration at this moment and the photograph is really not that important.

If you catch a salmon when fishing alone, you will need to accept there is not a responsible way of getting a good photograph of the whole fish. If you are holding the tail, you will not be able to get the rest of the large fish into the frame. If you stand back to get the big picture and leave the fish lying free, it will almost certainly flap around and injure itself. 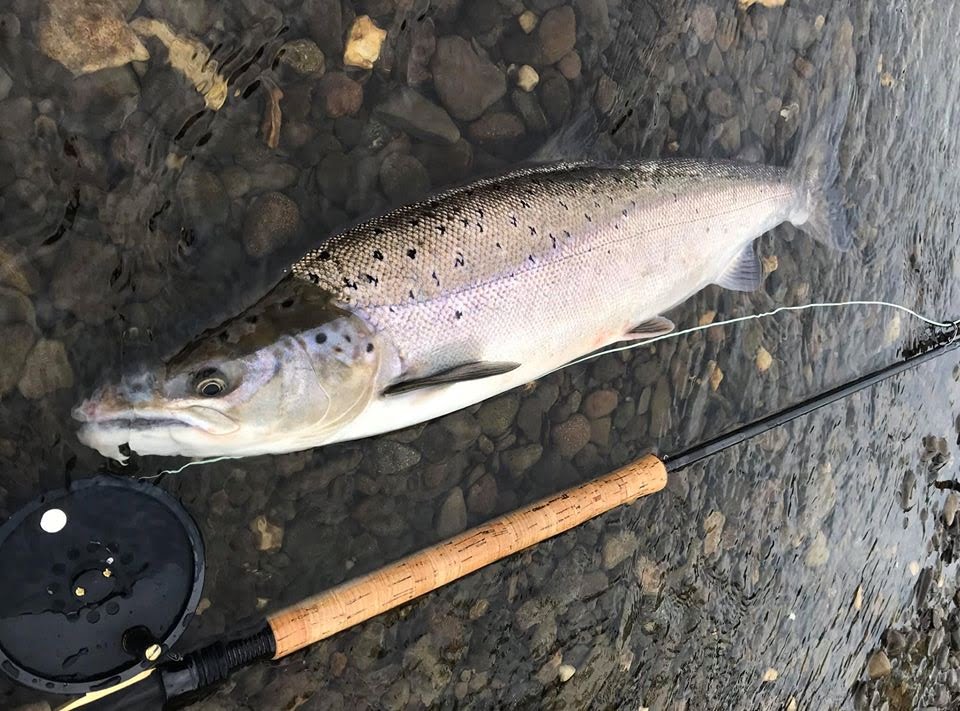 Atlantic salmon – in the water for a quick picture

If you have a companion however, he/she can take a photograph while you release the fish. Hold the recovering salmon in the water by the tail and supported under the belly and, when the photographer is ready, lift it a few inches above the surface for a second to get the shot. In the case of a sewin caught in darkness, there are additional photographic problems but it is still possible to get a shot, sometimes a good one, as you release the fish from the net. (Note that you can also hold a big trout by the tail for a moment, although not as securely as with a salmon). Have your camera on the correct setting and work out in advance what you are going to do with the head torch. If you are illuminating the fish with white light, you will want to shield the rest of the pool as you do so and you may sacrifice your night vision for a while. Again, please don’t take your fish out of the water.

Release: If you have complied with the recommendations above, your fish should already be in a process of gradual recovery. Carefully now back it out of the net in the shallows, holding the tail and supporting it under the belly and let it breathe steadily in the open water, keeping the head facing into any gentle current, but not where the flow is powerful. Be patient. If the fish shows any tendency to keel over you are in trouble, so keep nursing it, but you should gradually feel the strength returning its muscles and the fish will begin to undulate between your hands. All being well, the fish will eventually kick off and you can watch as it makes its way purposefully back into the depths and out of sight. A rather wonderful moment. 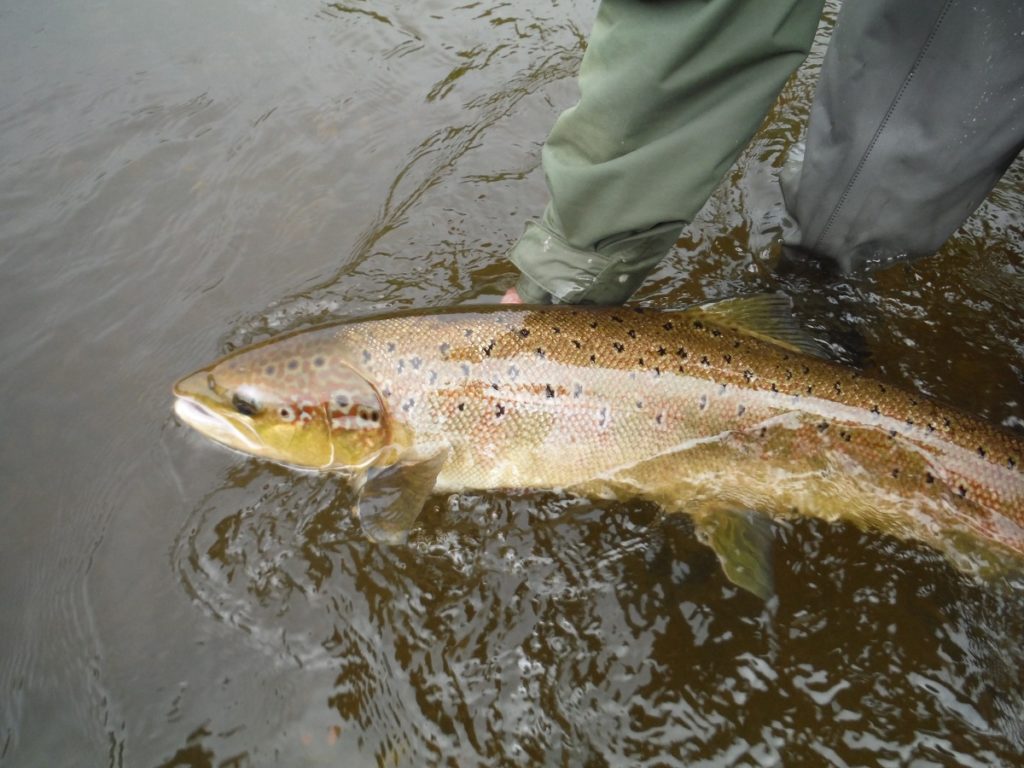