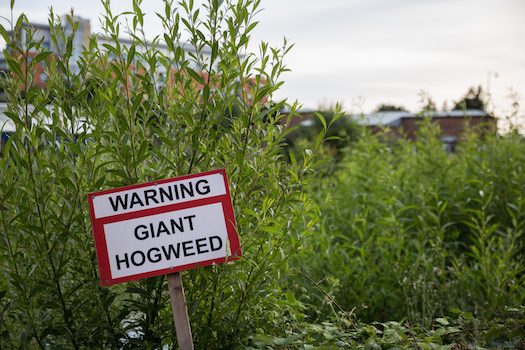 There are three major invasive species of plant to be aware of when fishing in Wales. Here Theo Pike of the Wild Trout Trust talks about them, and how you can fight back against Himalayan Balsam, Giant Hogweed and Japanese Knotweed.

Invasive non-native plants like these can cause real problems for your favourite stream, river or lake – and even spoil your fishing season completely. And while some of their worst effects don’t become visible until the spring and summer months, it’s never too early to start planning your campaign against them… 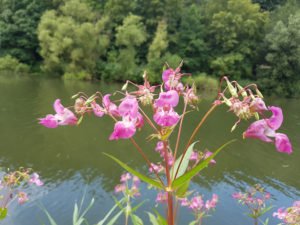 Also known as Policeman’s Helmet or Poor Man’s Orchid, Himalayan Balsam is probably one of the most widespread invasive plants in the UK. But the good news is that it’s also one of the easiest to tackle.

It’s very shallow-rooted, which is why it’s so damaging when it dies back in the winter (after shading out all the native plants and killing their root systems) and lets seasonal spates dump all the bankside soil into our rivers as silt.

However, it’s easy to pull up or strim from May onwards. Just make sure that each stem has been snapped below the first node, then pile up the plants somewhere dry and shady to desiccate. Start as far upstream in your river’s catchment as you can, to stop seeds floating down to recolonise areas you’ve already cleared.

For best results, you should plan to revisit each infested area once a month until around October, to pick off later-germinating plants which will otherwise produce up to 800 seeds each, causing even more problems next year. Monnow Rivers Association volunteers have successfully applied this approach for a number of years, even asking visiting anglers to pull up 50 plants as part of their day on the water.

For more information about Himalayan Balsam, visit the GBNNSS website. 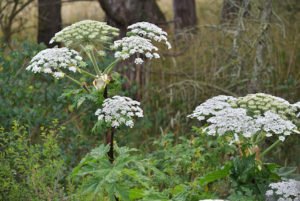 Once made famous by Genesis in their song ‘The Return of the Giant Hogweed’, this highly dangerous plant can occasionally be found along the banks of rivers and lakes in Wales.

Each hair on its towering, purple-blotched stems holds a bead of phyto-phototoxic sap, and if you get this on your skin, any exposure to sunlight will produce blisters and third-degree burns which can keep coming back for years.

While it is possible to you stop older plants from seeding by cutting off seed heads into a bin bag and incinerating them carefully, or to dig out young plants by cutting their thick tap roots at least 15cm below ground level with a sharp spade, It’s always best to seek professional assistance when dealing with giant hogweed – so contact NRW Wales

For more information about Giant Hogweed, visit the GBNNSS website. 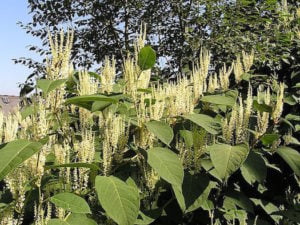 Once loved by Victorian gardeners for its bamboo-like stems and pretty, lacy flowers, Japanese Knotweed is one invasive species that’s best left for the experts to handle.

Having evolved to grow through hardened lava on the slopes of volcanoes like Mount Fuji, it makes short work of tarmac and concrete, and can destroy dams, paths and boat ramps – even fishing huts if it sprouts up through the floor. New plants can regenerate from thumbnail-sized pieces of stem or root, so even the smallest fragment is classified as controlled waste.

As a result, it’s best not to touch Japanese Knotweed yourself at all – instead, you can make a real difference by noting its location and telling your local council or rivers trust. They’ll send a specialist to treat it with glyphosate in late summer or autumn, when the plant is drawing nutrients (and thus any pesticide) back down into its deep root system. The Wye & Usk Foundation has already scored some notable successes in clearing Japanese Knotweed from the Afon Lwyd in this way.

For more information about Japanese Knotweed, visit the GBNNSS website.